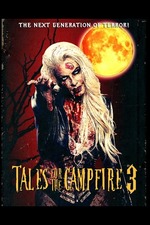 The third part of Dark Infinity’s Tales for the Campfire trilogy will delight anyone who liked 1983’s Scary Tales or 1997’s Campfire Tales or, well, any horror anthology. A quick burst of gory junk food, this would have fit in perfectly on the shelves of my hometown’s mom and pop video stores, whether that was Prime Time Video or Hollywood Video (not the chain).

Even the cover is reminiscent of one of those multi-time rentals of the lamented past, Return of the Living Dead 3.

As the Campfire Gang — Shawn, Ronnie, Ken, Rebecah and Amber — gathers around the campfire one more time to tell several different stories.

“We One” is definitely a tribute to perhaps the most effective anthology horror story ever, “Amelia” from Trilogy of Terror. “Cole Canyon Creeps” is all about the worst of all ideas, hitchhiking. “The Prisoner” concerns a mental patient menacing an agoraphobic woman on Halloween night*, which is perfect slasher fodder. It’s followed by another slasher story, “The Bitter Half**” and then finally, a tale about “The Gateway” to Hell.

This movie features plenty of locations that you’ll recognize from Child’s Play 2, Halloween III, House, A Nightmare on Elm Street 3: Dream Warriors and Tales from the Crypt: Demon Knight.

This is the first of these anthologies that I’ve watched and it moved quickly. So quickly, in fact, that it was over before I knew it. It totally doesn’t overstay its welcome!

*There are plenty of clips of Night of the Living Dead mixed into the story.

**Mel Novak plays a character named Dr. Challis, in case you didn’t know just how obsessed with 80’s horror this movie is.

My Summer as a Goth