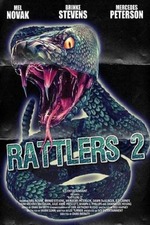 45 years after Rattlers, those same snakes are still slithering around the California desert, ready to bite anyone they get close to all over again.

Don’t worry if you never saw the Harry Novak-produced original. Enough scenes from it are replayed here that you’ll know the story. It’s simple — the flashbacks are shot on film and look beat up and the modern-looking digital footage is the story from today.

Director Dustin Ferguson has a regular cast that he turns to in film after film and many of them show up here, like Mel Novak as Commissioner Lewis, Brinke Stevens (yes, that Brinke Stevens!) as Rebecca, the always fabulous Dawna Lee Heising as Lindsay, Jennifer Nangle (Malvolia herself!) as Sally, Shawn C. Phillips, Julie Anne Prescott, Peter Stickles and more.

Writers Josh Price and Lee Turner have done a nice job of reminding audiences of the original film — or filling in the blanks if they haven’t seen it — while moving things forward.

If anything, I wish that the film relied less on the original film and that the ending didn’t feel so rushed. But that’s fine — Ferguson seems to be learning with each film and I’m always interested in seeing anything that he makes when it crosses my path.