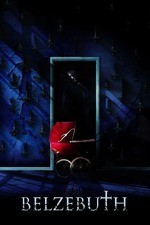 Technically accomplished, but shit script. I have a good word only for Joaquín Cosio, whose enormous and expressive face, distinctive voice (he was the Scorpion in Into the Spider Verse) and sheer physical presence is a formidable asset for any film. If you were trying to put together a great supernatural procedural and wanted to build your story around a hard-bitten cop with a big heart and a lot of pain, he'd be superb. Too bad that's not what happened here.

The biggest pet peeve for me is the incoherent scrambling of Christian (specifically Roman Catholic) iconography and theology. As soon as Tobin Bell's Vasilio Canetti starts talking about the Second Coming as a "reincarnation," and posits that the First Crusade was actually the Devil manipulating the Church to kill the (first) Second Coming, I'm done. I don't need my movies to reflect a Christian perspective. (Never mind the fact that "a Christian perspective" doesn't even narrow it down that much.) But demonic possession and the idea of spiritual evil aren't intrinsically scary; their dramatic potency depends on the film having a point of view that makes sense. When the storyteller is just mushing symbols together with little appreciation for what they mean, the viewer can end up playing a hollow game of "count the tropes," without experiencing any color or intensity. (See last year's El Habitante for an example of a movie where the scares land harder because the film as a whole holds together.)

When the movie starts, its depictions of mass murders, of violence against small children, are shocking and disturbing. When the mystery is solved and we find out the rationale, within the film, for the actual significance of these horrific crimes... and it's a deeply stupid answer... it retroactively makes the film seem manipulative and even dishonorable. If you open your film with a vivid depiction of newborns being stabbed to death, with maximum emphasis on the helplessness and devastation of the new parents, that's a very risky move! "Risky move" is not here some kind of code for "wow, dude, way to show some balls!" It means there is a risk. The risk is that you will look like an asshole if it turns out you were just fucking around to grab our attention. You better be telling a really amazing story and the depictions of the very things that are traumatizing us on a daily basis had better be essential to that story. Nope and nope.

Those two factors together are definitely enough for me to feel like "fuck this movie." There's also an overwrought musical score, often turned up loud and deployed in an assaultive way, and the runtime is nearly two hours.