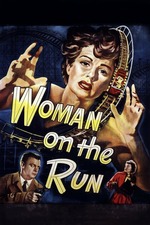 Woman on the Run

Um, excuse me, but like... why is nobody talking about this gem? It's so good! It might have all the signs and symptoms of a Noir, but you quickly realize that there's so much more to it. Yes, there's a murder in the shadows of the night, but it's also got a quirky inspector (Robert Keith), a cute dog named Rembrandt, wisecrackin' like it's going out of style, and an atmospheric finale at an amusement park. Woman on the Run, lead by a terrific Ann Sheridan, got me anxious, made me laugh, and gave me a lot of feelings over the romance at its core, which is extraordinary because it's so ordinary. More than anything, this is a story about a married couple who have lost each other while living under the same roof, simply because they have stopped to really see each other, but luckily for them, being dragged into a murder case just so happens to help them realize what they've got. This gave the film an emotional depth that I sometimes miss in Noir.

They Drive by Night