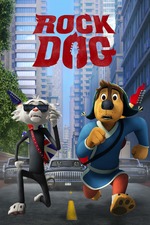 At first glance, Rock Dog may seem like some run of the mill cash grab. This Chinese animated film's budget of $60-million clearly went to the US localization voice cast, rather than the animation. If you can get past the underwhelming animation, you have a surprisingly fun movie filled with memorable and likable characters, genuinely funny visual humor, and a world clearly built on the backbone of lore. While the story can be a touch predictable, the positives far outweigh the negatives. For that reason, I give Rock Dog 4 stars." - Andy

"i didn't think there was anything wrong with the animation, i thought it looked pretty good. the story bothered me tho and felt like a ripoff of both hop (character wants to be a musician but his dad says no) and zootopia (the city setting with all the different animals is identical). i didn't like that they gave the dad magic powers but he never seemed to use them??? i liked the character of angus scattergood but that's about it. andy says this is one of the best dog movies we have watched but idk how he could even think that lol. 2 stars" - meghan

The scores have been aggregated! Rock Dog gets 3 stars!