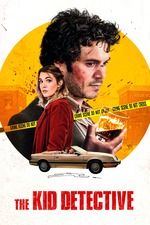 until glancing at a review or two i had assumed from the title that this was a movie for kids, which is most definitely is not. and then i thought, "oh god do we really need 'what if encyclopedia brown, but dark,'" which, bleh, but thankfully it isn't that, either. (or at least not to the extent that it feels cynical.)

what it IS is a little hidden gem of a movie with a performance by adam brody that's both sharp and understated, mixing neo-noir and dark comedy and coming up with a genuinely emotional concoction and a surprisingly affecting and effective ending.

Derek DelGaudio's In & of Itself