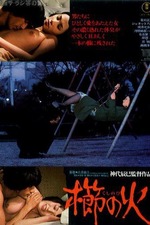 Starts out really promising but then tends to oscillate between boring and fully annoying. Kumashiro's eccentricities from his other largely non-pinku titles cranked up to the absolute max. While in Evening Primrose I enjoyed almost every choice that went against conventions, here it rather quickly escalates into being irritating and confusing. People muttering so indistinctly even Japanese viewers apparently find it hard to understand at times. Also doesn't really help that it's based on a fairly lengthy novel that most likely gives more insight into the male lead's thoughts and I feel like Momoi's character would've been just as or even more interesting to explore more.

Once the film finally realizes what it wants to address (mostly how difficult it was for a woman to get divorced back then and how men try to forcefully keep marriages "intact") it's actually somewhat okay-ish but at that point it's basically almost over and has a rather abrupt ending at that. Seems like the main issue is how it was adapted from the source material and maybe Kumashiro's quirks and tics kinda diffused the focus too much.