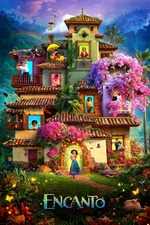 Loose ends not tied up, events left unexplained, no central villain/antagonist, no prince charming side story, no animal sidekick (unless you count the house itself)... This is the kind of Disney musical I've been hoping for and waiting for to show to my daughter and son and it did not disappoint.

All those things above wouldn't make for a good Mouse House animated movie, you'd say... And you'd be wrong. Instead of giving us the same old animated song and dance (literally), the craft applied to the story allows the family's magic to flow through their only (supposedly) unmagical member who is able to [magically] reunite her family who are breaking under the weight of the magical gifts they've been given. Viewed through a dense American lense, this is just "family drama with a magical twist", but when you look much closer you can see the magical realism of so many great Colombian artworks flowing through it (the key one being the yellow butterfly a la Gabriel García Márquez's One Hundred Years of Solitude). This kind of artistry is what gives Encanto a depth that sets it far apart from the usual Disney Saturday afternoon family romp.

The key piece to it all though: that Mirabel is able to mend the brokenness within her family and therefore in the (magical) house that built itself around them and has been their home for three generations, while simultaneously realizing the importance of her role within family is just being herself, without any supernatural aid or adversarial force is the kind of self-actualization/empowerment I want my daughter and son seeing on-screen. There is nothing outside of herself that causes this great change. She makes it happen simply by being herself, the supposedly non-special one they fear will tear the family and the magic apart. What a powerful lesson that is for my girl and my boy, any girl and any boy for that matter, understanding that simply being you is a powerful force to be reckoned with, maybe the most powerful tool we have at our disposal. This is exactly the kind of lesson I want more of for the films I'm going to be showing to my kids as they grow into the world around them and come to understand who they are within it.

💫 Hot Take 💫
Though Lin-Manuel is three for three for me so far this year (I've yet to catch up with Tick, Tick... Boom), the songs here weren't nearly as successfully interwoven or catchy as they were with his previous Disney entry, Moana, despite the finale being a quality crescendo for the film.