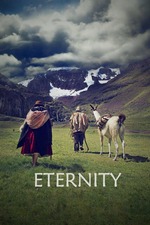 This was a heartfelt, though misguided debut from filmmaker Óscar Catacora. Peru had a beautiful submission to the Oscars in 2009 called The Milk of Sorrow. I loved it so much and it ended up being nominated for the Oscars' best foreign language film. Unfortunately, there is no comparison between these two films.

The filmmaker cast Vicente Catacora, his own grandfather, in the role of the main male character. He lives in a remote area. He is getting on in years and is having trouble surviving the harsh climate. Rosa Nina plays Phaxsi, his wife.

Vegan alert:
-The aftermath of at least five sheep killed is shown, entrails and all. The subtitles said the perpetrator was a fox, but it would have been impossible for a fox to kill these huge sheep.
-A llama is also killed.