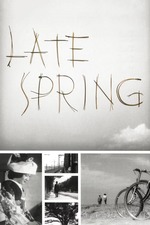 In an age deemed by many to be suitable—maybe even the latest—for marriage, I'm certain that it's more difficult to give up the life one is accustomed to. It's not easy to hear endless comments that pressure a woman into entering marriage out of her own volition. Heck, I'm only 21 and my parents would already imagine me getting married to someone (on the condition that I fulfill my duties as the eldest child first).

Ozu's Late Spring presents a melancholic and personal perspective of the borderline mandatory detachment rendered by marriage. By showcasing the intimate relationship of Noriko and her father until it reaches its inevitable separation, one could easily sympathize with both characters. The way this story was depicted shows a sentiment that the supposedly new chapter of life brought about by marriage is a difficult one to face not only on the woman's side but also on the family's—the one that has been there since the beginning.

Life is a continuous movement and I, despite not being a fan of marriage, agree that that rite is one of the many manifestations of how we are never meant for stagnancy. We live, we love, and we leave. We move forward, we break, we rise. In every step we take, there is no guarantee that we will like what life has in store. We are uncertain if we experience happiness from it. But as the film says, we don't expect happiness—we create it.