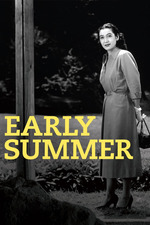 Generally, Early Summer had a more lighthearted approach on the central theme of marriage than Late Spring. I think the most fun part that I loved about the film was the banter and the divide between the married and single friends. It was relatable in some way, and also telling of how people see relationships and marriage in different perspectives. The course of action in both films, despite both ending up in marriage, was driven by different motivations—but at the core of it all was still the weight of societal pressure influencing Noriko's decision. Funnily enough, that weight won't get relieved upon the decision to marry, because the superficial standards of people around us is another one to carry. I loved how Ozu portrays that through his slow and meditative style of storytelling, and the way he piques curiosity and interest in camera movements. Don't get me started on Setsuko Hara's beauty, too! Anyways, this is my third Ozu film and needless to say that he never disappoints!