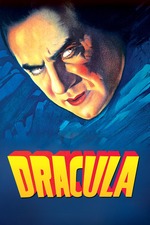 It’s aggressively edited, with several scenes ending as furtively and abruptly as a guy trying to get out of work before quitting time. We allude to matters that don’t resolve. Also, Tod Browning seemed less than compelled to find the most interesting and exciting ways to film several scenes.

So why am I giving Dracula an enthusiastic five stars? Because it’s a foundational film, a bold step forward for horror at a pivotal time, and it had inestimable influence. In other words, I gave those stars out of respect, and you’ll do the same if there’s a decent bone in your body.