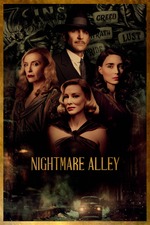 I will say: Guillermo directs on the highest possible echelon in Nightmare Alley. His craft is exhibited in every scene; his distinct visual flair is ever-present in the wonderful costumes and fantastical set designs.

But there’s a cold, almost mean-spirited aura about the film.

Which is fine—some of Del Toro’s works have had cruel elements, whether narratively, visually, or both.

But it's usually countered by trademark Guillermo heart, however big or small a role it plays. There’s none of that here, which didn’t allow me to latch onto anything; without emotional investment, I was powering through its strenuous runtime on curiosity alone.

And unfortunately the story is pretty telegraphed from the get-go, unfolding exactly the way you might have guessed it would from the halfway mark.

The journey there is, at least, a feast for the eyes; Cate Blanchett and Bradley Cooper devour their performances; and there are a handful of brilliant sequences dancing around mysticism and the mind.

Would pair nicely with Nolan’s The Prestige.