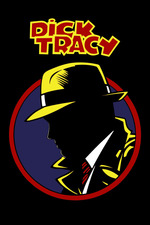 Goddamn, it feels weird watching a movie you haven’t seen in thirty years. From the moment you see the mobsters decked out in grotesque makeup having themselves a poker game, you know you’re watching something special. And the key word here is “watching” - this is an absolutely fucking GORGEOUS movie, full of matte paintings and luridly oversaturated colors and costumes that make Chester Gould’s world of cops and robbers come to life in a way no director would dare try today (not even with CGI at their disposal). A cursory glance at the production history would tell you what a labor of love this was for Warren Beatty, and it shows in every inch of this movie, right down to his 100% committed performance - and that’s really the only way this shit would work, because trying to do some irony with this material would be a terrible mistake just as much as trying to do that with a Calvin and Hobbes movie would be. I can’t exactly say this movie is perfect or anything, as the screenplay constantly feels like every other line was cut out (I owned the novelization, so I have an idea), the performances are SO cranked to 11 by everyone in this ridiculously stacked cast (especially Pacino, who yells when he’s not supposed to, unlike in a Good Pacino performance like The Irishman) that it’s a bit unsettling at times, poor Glenne Headley has to make chicken salad out of chicken shit, and there’s somehow too much going on even though a movie like this would be at least a half hour longer in 2020. But it’s still well worth the watch for how absolutely stunning it is to look at, for the surprisingly good period-evoking Sondheim songs, for just how many fucking famous people are in this goddamn thing, and for shit like the final shootout at Club Ritz when an insanely ridiculous fusillade of bullets make this flick really come alive. Dick Tracy really should get a peephole for his front door, it’d save him a lot of trouble. Shout out to the Thompson submachine gun, aka the Tommy gun, aka the Chicago typewriter.