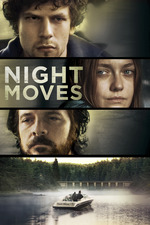 I finally caught up with the 2013 Kelly Reichardt film "Night Moves". I love Reichardt as a filmmaker, and the Oregon/ Pacific Northwest surroundings (where I grew up) and gorgeous tracking shots thereof were always going to be an easy sell for me.

While this movie got mixed reviews upon its release, I think it is a solid eco-terrorist caper film that deals more with the psychological impacts of doing a bad thing and how the combination of paranoia, guilt and anxiety can drive subsequent further evil in people. The film wonderfully balances internal tension with what is a fairly simple story and never feels the need to tell you too much. Reichardt is such a good visual storyteller that the occasional lack of narrative information is in no-way a detriment.

Its also interesting to see a film ostensibly about terrorism presented as being performed by white lefties in a film, as opposed to by Islamic terrorists. The film's narrative does a great job of pointing to how even well intentioned and carefully planned radical acts of violence can have terrible and difficult to predict consequences.

The only issue I had with it was, though the performances are all uniformly excellent, I felt like Dakota Fanning's character was a little thinly drawn - an interesting issue for a film written, directed and edited by a woman.