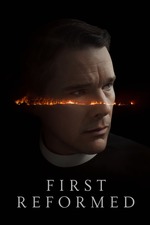 First Reformed is a tremendous film from Paul Schrader. The film was something of a surprise to many after the last few Schrader projects haven't quite hit the transcendental high water marks of some of his very best work. This film deals with some of the weightiest political and spiritual considerations of our time with a depth and intelligence that even this atheist could understand and appreciate.

Ethan Hawke turns in an at first subtle and increasingly bold performance in the lead. I will avoid talking too much about the plot to avoid revealing any of the twists and turns, but the character's evolution is, in a way, both highly logical and harrowing.

The choice of the unusual 1.66:1 aspect ratio really works in this film, the slightly boxy shape of the screen giving the film a somehow more intimate feel. Given that this is ostensibly a film about how individuals struggle emotionally, spiritually and righteously with the cognitive dissonance inherent in confronting the pressing ecological questions of our age, this feel only amplifies how highly personal the film as a whole feels.

This is a highly pressing new work from one of the great working American filmmakers. It is a film that I can see myself revisiting.