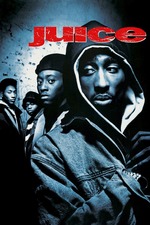 I love ghost stories that aren't really ghost stories. And everything about this one feels like a ghost story. Ernest Dickerson has a really great eye for setting up these really moody and atmospheric frames that often feel like Apichatpong Weerasethakul shooting a city and there are so many frames that feel like we're watching someone being haunted. Other times it feels like Dickerson is using the camera as a ghost waiting to possess its next victim. The possession of the camera is most apparent during the botched robbery scene where Tupac's character shifts to the antagonist. The way the camera looks down on the apartment complex as the shadows of everyone's body feels like souls resting in their final place and he's the cause of it all. From there on out it feels like he's possessed. The way he smiles, the way he seems to stop doing anything that would normally interest him, the way he almost glides through the night fog, the way he almost forms out of the fog behind Omar Epps and stalks. The entire thing feels so ghostly and
Dickerson's camera creates some haunting imagery.

There are shots of people against curtains with lights peaking throughout. The camera is often placed slightly above people from their backs, so it feels like we're the ghosts just watching people go about their lives. There are so many shadows and silhouettes littered throughout. And it's almost harder to forgot shadows and outlines of people than it is to forgot a face you've fully seen. At one point during the movie, there's this wide shot of a bunch of people lined up to enter the DJ competition against a brick backdrop which feels like people lining up to enter hell. Once inside the DJ competition the camera often hovers above the crowd which gives it a feel of watching a party in hell take place. At the end of the movie some random person says to Omar Epps that he has "the juice" now and he walks away. There's really no escaping the possession in this world.