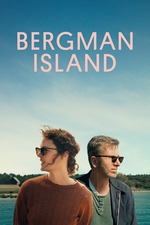 Mia Hansen-Love's latest curdles with a playful energy that unfurls slowly. It begins like a Hong Sangsoo, pleasant and slow, with a minimalism that provides a laser focus on the two tremendously talented performers at the center of the story - Vicky Kreips and Tim Roth. The setting is idyllic, the couple seems happy, and the tone is light. They toy with the prospect of stormy horizons, noting the bedroom they've booked is the one Bergman set his famous Scenes from a Marriage series in, but their gentle ease with one another dispels any doubts.

It spoils nothing to say, any movie with Bergman in the title could never end so pleasantly nor so mildly. In the back half of the picture, Hansen-Love finds a clever and winding path through bisecting narratives, as unspoken tensions froth up from the edges of the screen. Mia Wasikowska and Anders Danielsen Lie play characters in a story nested within a story and, much like Bergman's perennially enigmatic best-known - Persona, the boundaries between the nesting narratives begins to blur. Hansen-Love is smart to keep the twists restrained and the bubbling emotions at a low simmer, because the picture's jolting energy in this half is enough to sustain our attention.

The film is both reverent and irreverent in its view of Bergman, as an artist and as a person. Hansen-Love lenses many locations from Bergman's most famous films in loving, but never slavish, homage. However, the focus here is not a puff piece, but a character study of a couple. And, it succeeds wonderfully at that. It may be a tad airy for what could have been a more substantive exploration of a relationship in strain, but what is here is wonderfully unpredictable and consistently a pleasure to watch. This is one of my favorites of the year.