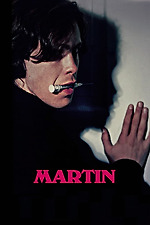 70's Guerrilla filmmaking with the heart of Pennsylvania. It's hard not to Romero fanboy out on Martin.

A mixed up kid, lost in the shuffle. Mental illness and gothic dreams. It's all jazz class from George. It's just too damn weird and cool.

I'm not going to go too heavy on this. I'll just say that there is something genuine about Martin. It would never have hit as hard if it wasn't Romero and family doing there thing. But it is. And it feels pretty good.

A unique and hyper modern spin on the lonely vampire tale, spackled with 70's stage blood and minutia. Subtle and slippery. It never allows itself to be too easily defined. Murder, sexy time and family dysfunction.

John Amplas defies convention and gives us a performance that rivals all the sympathetic outcast oddballs. You'll see a handful of recognizable faces here.

Rubinstein fills the score with curious percussion and playful bits and bobs. It's charming and really fun, as often as it can be and dead serious in the proper moments. It's all over the place and fits the many tones of the film.

The great unreliable witness tale.
Life is full of uncertainty. Hard Lessons. Learning how to never get caught. Decency and shame. The unbearable lightness of being a vampire and the crushing weight of human degradation. Again, I've said too much.

"In a way I'm glad it's all over. I shouldn't have friends. Not even for the sexy stuff."