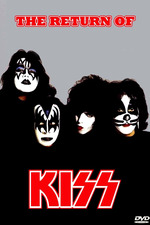 'The Concert That Took a Lifetime'

I'm humbled by my visit to another planet last night. Apocalypse, End of the world, Armageddon. It's always got a face and a name. I've been hunting this experience for 30 years, give or take. 10 year old me was very much alive last night. I didn't know entirely how I'd feel when we left the outdoor amphitheater. The audience shuffled out like the living dead. The young and old pooring out into the wetlands of Michigan. Creatures of the night.

In the year of our lord, 2021, my big brother and I climbed into his vehicle and he took me to see his favorite band since the 70's. The band belonged to him in my youth. And I have always had a tough time being part of the mindset to have a #1. Having a singular band that rises far above the rest for you is a gift bestowed. I've looked for my 'KISS' my whole life. But it's always been an ocean of sharks,, never finding my white whale.

I had some beers and took some pics with painted up KISS fans. As we toughed it in the rain I saw the makeup melting off many of the KISS Army. They were all smiling and I felt the positive energy radiating. It warmed the cool air.

My brother was anxious like he was getting ready for a title fight. I liked that. I rarely see him excited for anything. The buzz was like an electrical current from an invisible moon-sized Tesla coil conducting tsunami radio waves. The giant logo staring back at me from the stage was occult-like in it's behemoth size and font. We gathered in the forest to stand before the altar. This was Rock royalty Bohemian Grove.

The bands physicality was not that of a professional set of men but true rock gods or the distillation of what rock gods might be. I was completely transported to another dimension. It may have been the giant Jamber that a Paul Stanley look-alike smoked with me, I'm uncertain, but I was genuinely having a psychedelic experience. I was lifted to another state of mind. I was on a UFO with the hottest band in the world.

Processing what I was seeing with no ego was beyond good and evil. Bouncing between a blank slate and then feeling the immense weight of music history on my psyche. Like seeing the concert through the hive mind of almost 50 years of rock n' roll fans. Stoned immaculate.

Tracers on the screen of each member, pulsing instrumentation. Pure aesthetic perfection firing at me from every angle. All my eyes could do was attempt to absorb the bombasity, my ears slurping up the sonic booms and super sexy swingin' sounds of the 70's and beyond.

Gene Simmons genuinely terrifying midshow Demon showstopper was like being reborn in fire. I had no idea it would make me feel that whole. The green and red hues fused with the bloody grand guignol on display put me in a truly supplicated trance. I was worshipping the god of thunder and my devil horned arms were fully elongated like antennas reaching straight to heaven. I felt honored to be there and had nothing but respect for the dark lord in front of me.

Sobering moments would eventually come to pass like waves on the shore. Knowing it wasn't Peter Criss or Ace Frehley there in the make up creates an uncanny valley effect. It fades in and out of your euphoric mind.

The show, in so many moments, belonged to Paul Stanley who to my shock and awe is something different than what I had always thought. 'Larger than life' is a cliche. But it stands to be the best words to describe him. And in truth, there are no words to describe this experience. You really would have to be there. If aliens came to earth and watched KISS perform they would admire our species for birthing such awesomeness into the universe.

I swam next to a white whale last night and it humbled me permanently for what a concert can be. It may never be as good as it was when KISS was young and we were young. But the intention was the purest musical Magick I've ever bared witness to and I will hold onto this memory for the rest of my mundane existence knowing I was once in the presence of a majestic leviathan. Thank you from the core of my being, brother Bill. I'll always be that 10 year old kid looking up to you.