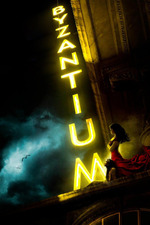 Clara and Eleanor Webb's tragic journey through the progression of existence. Gemma Arterton conducts herself as a true vampyre. Her performance is fearless and greatly underappreciated, secreting sex and blood all over the celluloid.

Film as the art form. Showing beauty in the pain. Neil Jordan proves again he can film poetry and conduct orchestral manoeuvres in the dark. The vampire ballad of Eleanor. Reaching inside myself I know this much is true: Suffering and misfortune spread like blood on floor. It's very difficult to get rid of it.

"May the light shine upon you."

Saoirse Ronan is undeniable. If there is only one performance from her this is the one, for my part. Pure meloncholic class.

Clara and Eleanor are opposite sides of the same coin. Surviving, regardless the lack of pleasure derived from a life less lived,, the eternal curse. The bloodfalls of the soucriant island. The nameless saint and lost souls. To endure is the great Horrorshow.

Eyes that cut through lies. Lungs that breathe eternity. This is Interview with the Vampyress and it's a wonderful character study.

A muted modern blend of the family bloodstream. A tale of condemnation and letting go, displaying the complicated dynamics between a mother and daughter and their love and loyalty that echoes through time. Damnation and salvation.

"I am Eleanor Webb. I've given you my secret. I've told you how I live."