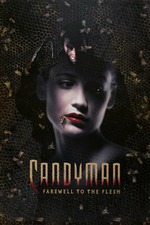 Candyman: Farewell to the Flesh is a good followup to Candyman (1992), but it left me a bit confused.

Farewell to the Flesh begins with an author giving a lecture on the Candyman. After the lecture, he's confronted by an angry man named Ethan Turrant whose father was killed by the Candyman. Ethan feels like the author could have done more to help his father. Well, it's all academic anyway because the author says "Candyman" five times into a mirror and he's soon dead. The only wrinkle is that Ethan is blamed for the murder.

Although Farewell to the Flesh is an apt sequel, I miss the folklore elements that make the first movie so good. Here it's more of a murder-mystery—except that we know who is responsible for the murders from frame one.

This movie goes into much greater depth concerning the origin of the Candyman. We see scenes of the lynching where a mob cut off his hand and smeared him with honey—thus resulting in the name Candyman.

But all of this left me a bit confused about the morality of the film. Why is the Candyman, who suffered cruelly at the hands of a white mob, a killer of anyone who says his name five times, including black people? I don't get it. In the new Candyman (2021), the Candyman appears to be a sort of supernatural angel of vengeance who is sent to right wrongs (at least, that's how it appears at the end of the film). Here, I'm not sure what purpose the Candyman is filling. If he's just a killer like Jason or Michael, why does he need a deep and historically painful backstory? And if he does have such a backstory, why is he apparently killing randomly? I'm a bit lost.