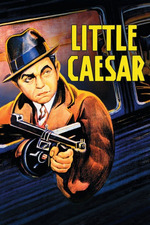 The Motion Picture Production Code opens with a few general principles. Many are purposefully vague. “Correct standards of life” are to be respected, the law “shall not be ridiculed,” and in its particular applications, murder must be portrayed in a vague manner that “will not inspire imitation.” But this first item on the list may be the most telling. It reads, “No picture shall be produced which will lower the moral standards of those who see it. Hence, the sympathy of the audience should never be thrown to the side of crime, wrongdoing, evil or sin.”

On the surface, Little Caesar abides by these rules. Its hero, minor crook turned kingpin Caesar Rico Bandello (Edward G. Robinson), openly thumbs his nose at the law and its enforcers. Aside from Bandello’s death, the film’s murder sequences are shot from a distance. There’s no blood, and Bandello is portrayed as insecure and jealous. It almost makes sense that Jason S. Joy, a relatively lax overseer for the Motion Picture Producers and Distributors of America (MPPDA), argued against cutting the movie for fear of compromising “the moral value of the picture.”

This speaks to the state of American film censorship before 1934. On the one hand, Hollywood films needed to turn a profit, and executives believed that violent, risqué pictures sold tickets. But professionals in the movie industry had also begun to see their work as a legitimate business, and outcry from scandalized religious and youth advocacy groups threatened that perception. As a result, trade organizations like the MPPDA were formed to launch public relations campaigns that would outwardly promote a strict sense of morality while letting more adult content go untouched (for a few years, anyway).

While early efforts like the “Don’ts” and “Be Carefuls” emphasized movies’ roles in shaping viewers’ morality subtextually, the message rings loud and clear through the text of the code. As a result, the document reads like the hysterical indictments of violent video games that were so prominent in the early 2000s. If the public saw sex or violence portrayed onscreen, they may become desensitized to them or even be tempted to repeat them.

The production code wasn’t heavily enforced until Joseph I. Breen became head of the Production Code Administration in 1934, but its influence can still be seen in Little Caesar. As the Polish filmmaker Andrzej Wajda wrote, “Real censorship is motivated by fear about going beyond the prevailing ideas of decency, taste and even social or moral prejudices.” In both form and content, Little Caesar toes the line of the code’s morality, but doesn’t transgress it.

There’s little that’s striking about the film on first viewing. Its shots are relatively static, and many of them feature characters feuding in blandly decorated rooms. But the lack of music stands out, especially when intertitles fill the screen. The film’s style is almost deliberately unsensational, but it also lacks the documentary realism of modern crime films like Gomorrah. It never fascinates the viewer with directorial flair, yet the outsized performances never make Bandello feel convincingly human. Instead, Little Caesar occupies a bizarre middle ground that neuters any onscreen violence of its impact.

Yet these depictions can have strange outcomes. Today, critics and filmgoers argue that PG-13 violence does more to desensitize viewers than R-rated brutality because it presents the sadism of a crime without its consequences. In the same vein, Little Caesar’s bloodless criminals came to represent an aspirational model for its viewers rather than a deterrent. As moral crusaders attempted to protect viewers’ virtue, they unwillingly created an environment that allowed these beliefs to be contradicted.

Thank you for reading this entry in the 2017 Film School Drop Outs challenge. For additional essays, information and a list of works cited, please click here

NEXT WEEK: A check-in with the master of suspense himself, Alfred Hitchcock